The Ranelagh Garden house is a 3 story over basement with the kitchen, the most used room in the house, in the basement. The courtyard area outside the kitchen was very bland with no interest or detail to look out at. The water feature was ideal here as it provides texture and detail in such a small space. A sheet of clear perspex was used to catch the water to bring it down to the pool. If this wasn’t used the noise would have unbearable. Stone paneling was used as a center piece behind the perspex to create a natural feel and hardwood paneling was used either side to give a rich feel to the area.
With the planting beds being quite small and the walls being over 3 meters in height, cupressus pyramidalis were used to soften the area. To be able to use steps in any garden is a bonus as it creates great interest over different levels. As the garden had a slight slope steps were achievable linking the main stone surface to the lower garden area and the raised pergola area.Aside from the steps, other areas of interest were created. The stepped feature bed created interest with planting at 3 different levels and it helped hide the height of the back wall which dominated the area. The garden room is ideal during the day and night for entertaining. The pergola gives and elevated view over the whole garden and the bespoke seat looks out over the lawn area,
The stone used in the walls and garden room is blue limestone which was chosen to tie in with one existing boundary wall. The stone paving is Portuguese granite which has a natural red color which picked up the tones from the house.
The planting carries year round interest from color, leaf texture, evergreen foliage and scent. Scroll down to see how this garden looks after just one year. 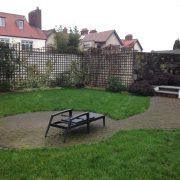 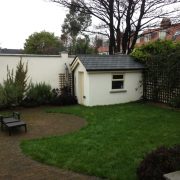 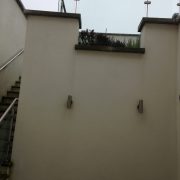 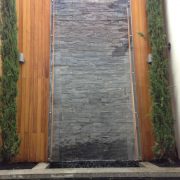 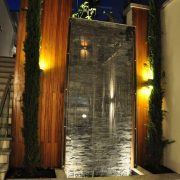 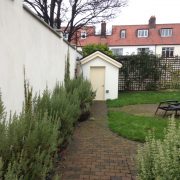 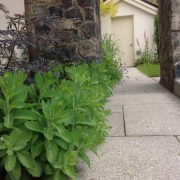 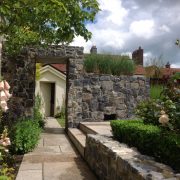 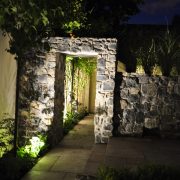 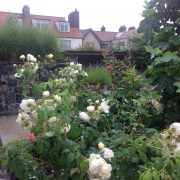 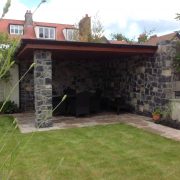 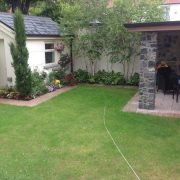 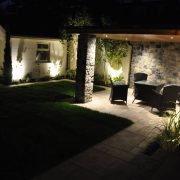 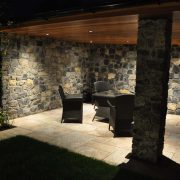 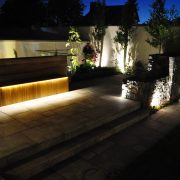 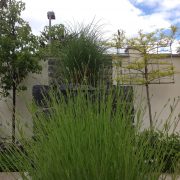 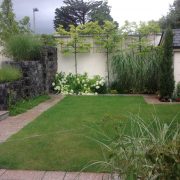 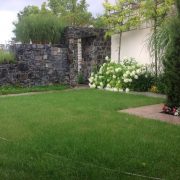 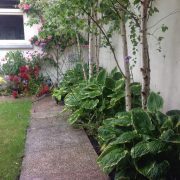 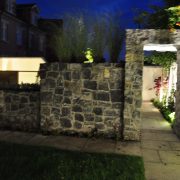 When was the work done?
Our work was done in June and July and took 6 weeks.
What was involved?
The work involved some new structures e.g. a pergola ( which had to be in keeping with an existing wall), the creation of a few seating areas, easy care planting in beds, small trees with seasonal interest, a water feature, a rose bed and planting of a shady area that already contained a huge tree. Ross also recommended changing the existing paving and, while I wasn’t sure initially, it has worked out so well and is so suitable with the brick in the house.
How did you choose Greenstone Landscapes?
I chose Ross because I saw his show garden in Goatstown and liked it.
Had you definite ideas in mind before you talked to Ross Farrell?
We already had a garden when we bought the house and it was quite adequate with grass, some planting and paving. However I thought it needed a bit of improving and had some ideas.
Did Ross introduce new ideas?
Ross took my ideas on board but what I ended up with was so much more. A gardener would probably have done as I thought I wanted whereas Ross took my plans and showed what could be done by a designer. There is no way I could have envisioned what we ended up with.
How did the project run?
The entire project ran according to schedule and the front common area which had to be utilised in a small area near our house was returned to normal immediately.
I was very concerned about disturbing my immediate neighbours but, as he explained , he was used to working in close proximity to other houses and there was never a problem. Everything was cleaned up and tidied before 5 each evening.
What was the biggest benefit to you of using Greenstone Landscapes?
There were many benefits to using Greenstone. Firstly, Ross showed us what exactly he proposed and gave us a printout. When the job was done he asked me was I surprised and I surprised myself by saying no because it was exactly as in the plans.
Another benefit to using Ross was I could talk to him at any time and discuss what was happening.
What’s your favourite part now?
Right now, I’m not sure what my favourite area is. Probably the plants and roses which seem to change all the time and I’m looking forward to seeing them next year. Other members of the family are delighted with the entertaining possibilities that the seating areas allow.
Would you recommend Greenstone Landscapes to others?
Well, I have already done so twice.
Any tips for other people?
Any tip I would give to prospective clients is be open to suggestions and recommendations.