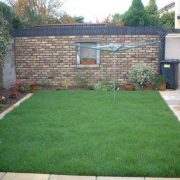 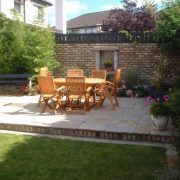 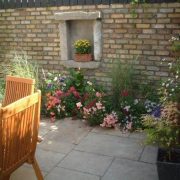 Customer reference for Greenstone Landscapes
By Joan from Templeogue, Dublin 16

When was the work done?
In October 2004.
How did you choose Greenstone?
Greenstone were highly recommended to me by a couple of people, including another gardener – Michael Butler. We wanted stonework and we were told that Greenstone were definitely the best company for stonework. And when I met Ross, I was hugely impressed by his approach.
Had you definite ideas for your garden?
We wanted to get rid of some very large evergreen trees which made the garden very dark. But we still wanted privacy. We also wanted a patio area and some lawn.
Did Ross introduce new ideas?
Yes, he took time so see what ideas we had and he brought a lot of ideas of his own. He also brought us to see another garden to get some more ideas.
What was the overall project process day to day?
A few days after the initial meeting, Ross came back to us with a plan drawn up. They started the job on time and stayed until it was finished. There was absolutely no disruption to the household. And if Ross said he was going to call at 6 o’ clock, you could set your watch by it.
What was the biggest benefit to you of using Greenstone?
Ross took complete control of the project – he project managed it from start to finish. Another benefit was his contacts. For the brick, he suggested that we look in a place in Dalkey which I had never heard about. For the planting, he brought me to a wholesale nursery to choose the plants.
What’s your favourite part now?
The garden is a lot more useable. We sit in it more and we eat outside a lot more. It’s brighter and it has more character. It’s also much more manageable.
Would you recommend Greenstone to others?
Yes, absolutely, without hesitation. Ross’s whole approach was excellent. He delivers on his promises and you definitely get what you pay for.
Any tips for other people starting on a project like this?
Talk to a few landscapers. Some are better than others. The other advice would be to tackle the whole project in one go – it’s easier than trying to do it bit by bit.

VIEW PROJECTS GET A QUOTE
Patios