This large Wicklow garden with incredible views over the Wicklow hills was largely under utilised because of the very steep slope which fell away from the house. Greenstone Landscapes suggested building retaining walls and patio so that the existing banks around the house could be kept. However, the remainder of the garden was reshaped and leveled.
The garden now features a wide patio around the house, steps to a smaller circular patio, a beautiful lawn, flower beds and a gravel driveway. 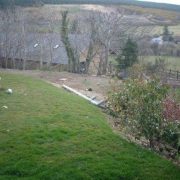 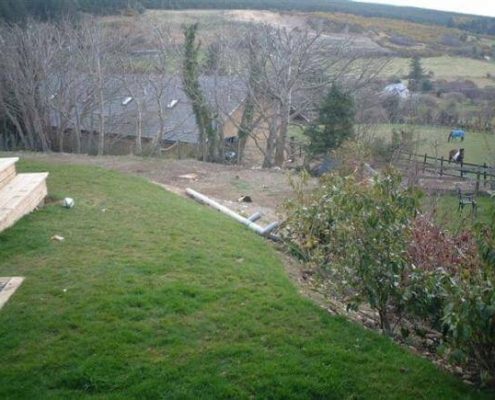 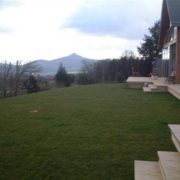 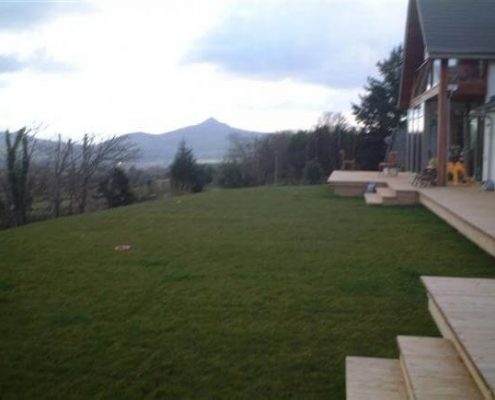 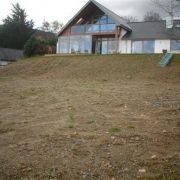 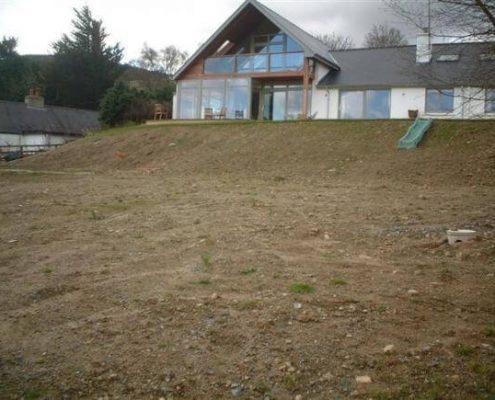 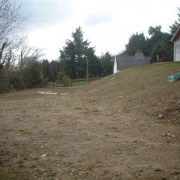 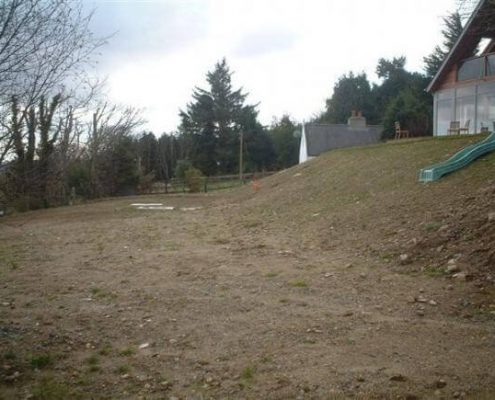 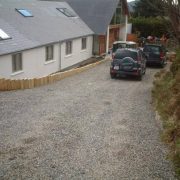 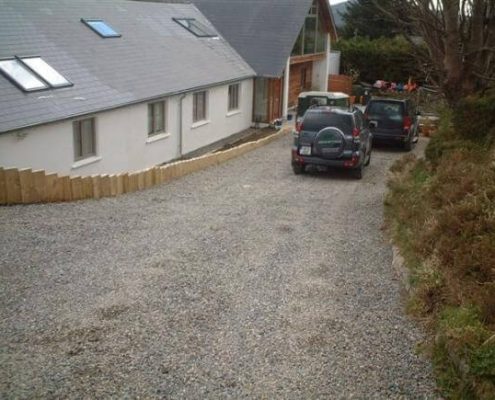 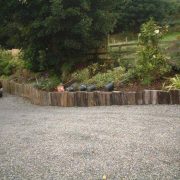 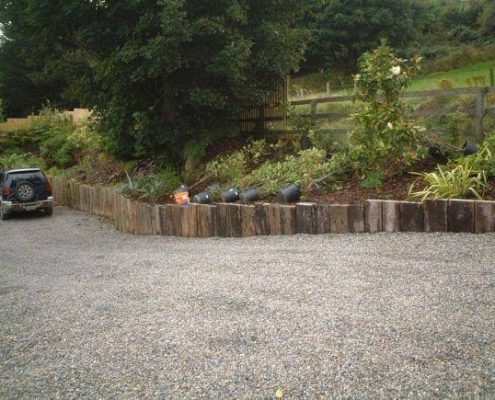 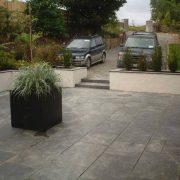 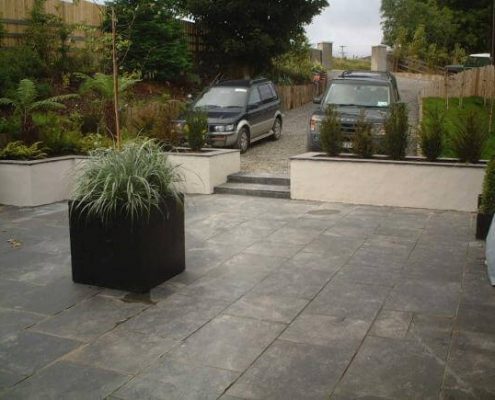 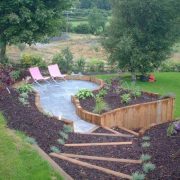 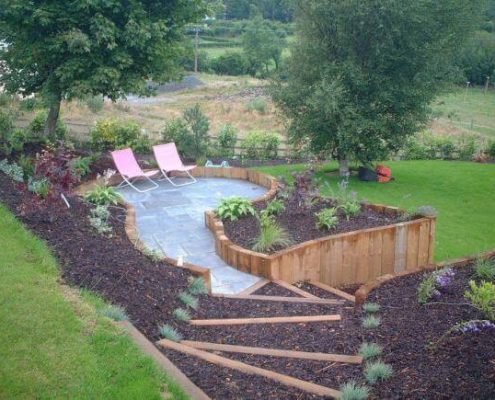 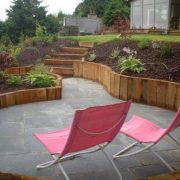 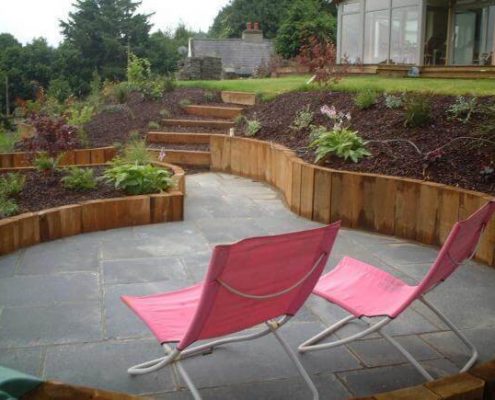 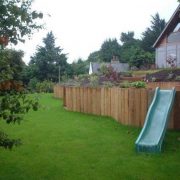 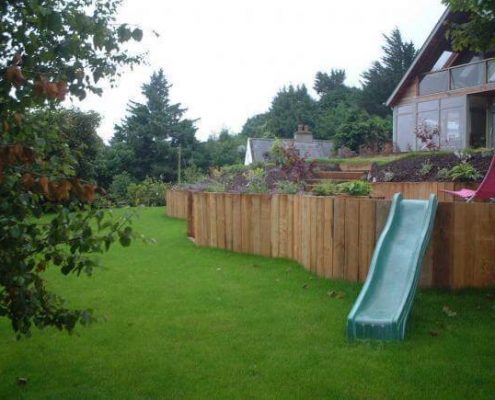 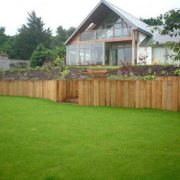 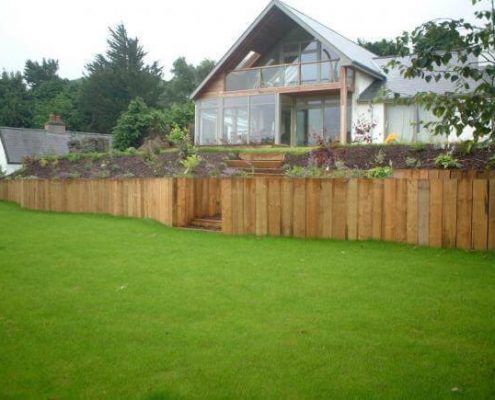 When was the work done?
The work was started in late May and finished in July. The whole project took about two months.
What was involved?
The landscaping involved a bit of everything. The garden was sloping so there was land reshaping and a retaining sleeper wall was put in. A patio was built, a new lawn was laid and flower beds were planted. It was quite a big job.
How did you choose Greenstone Landscapes?
I found Greenstone Landscapes on the web. I was on the internet and saw a testimonial about Greenstone from someone I recognised. I knew the person who gave the testimonial as being a good judge of character and that helped me to settle on choosing Greenstone.
Had you definite ideas in mind before you talked to Ross Farrell?
We had a pretty good idea of what we wanted but we didn’t know how to get there. There were going to be some difficult areas that needed to be overcome and we needed someone to do a little problem solving.
Did Ross introduce new ideas?
He did, yes. Ross was good about letting us know what could be done and what was unrealistic. He helped us to solve some of the problems we were going to encounter. For instance, we had some slopes and banks and we needed to either use them or lose them. Ross showed us how they could be kept by using retaining walls and extending the patio.
How did the project run?
Ross was very reliable and kept in touch even in bad weather when it wasn’t possible to work. I never felt like I was left stranded which was my main fear. Greenstone were very professional in how they carried out the work.
What was the biggest benefit to you of using Greenstone Landscapes?
What was key for me was that Ross worked well with us and was very professional. Another benefit was that when we were discussing the job and the budget, we worked backwards from the high end of the scale and found a middle ground. Ross didn’t just give me a price and not budge.
What’s your favourite part now?
I suppose the bottom section of the lawn. To see the kids and dog sprinting around it is a joy to behold.
Would you recommend Greenstone Landscapes to others?
Yes I would. With Ross you get a real professional who won’t rip you off. He’s also a really nice guy.
Any tips for other people?
Make sure you’re able to get on with your landscaper. It’s as important as getting on with an architect if you’re building a house. Also, if you’re involved in a new build, plan your landscaping at the same time. A lot of people think landscaping is nothing more than just putting down grass and plants but it needs to fit the scope of the house as well. The way the house is laid out may determine the type of garden you’ll be able to choose.

VIEW PROJECTS GET A QUOTE
Garden at Angle